Spine 2007- Annual conference of Neuro Spinal Surgeons Foundation of India was held in Cochin from 28th till 30th September. 18 delegates from 8 overseas countries along with 150 local delegates attended the conference. Prof P S Ramani – the President of the organisation along with Dr Kailai Rajan, the Secretary of the organization and Dr R Ravi, the Organising President of the Conference supervised the proceedings. 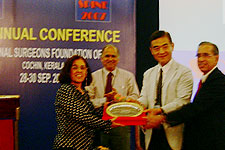 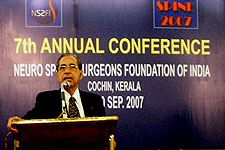 As is usual, a large contingent had come from Japan to highlight us on the latest development in this science. Dr Rosa margarita Gomez Bello, a scientist on Stem Cells from Bogota in South America delivered the Prof P S Ramani Oration.

The main theme of the conference was minimally invasive Spinal surgery and several symposiums and lectures were dedicated to this topic.A symposium on behalf of WFNS Spine Committee was conducted by Prof P S Ramani who is the Chairman of the Spine Committee. Speakers from Japan, China, Korea, South America, Oman, Malaysia participated in the symposium along with some Indian Speakers. The symposium was well attended and held lively discussions with the speakers.The highlight of the conference was the CME programme which was organised as live operative demonstrations on first two days with four surgical demonstrations o latest advances like functioning cervical disc, Kyphoplasty and endoscopic discectomy.Dr Destandou gave live operative demonstration from Paris-France on endoscopic discectomy with clear pictures and lively cross country discussion.Later several hands on workshops were organisd to give practice to the delegates.The conference concluded with resolve to have more contructive participation in future meetings by overseas countries.